A very special talk and walk – with Calum Beeson 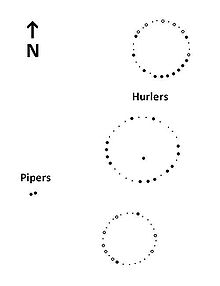 All of our Tamar Dowsers events are enjoyable, some even quite educational, but this one was in a quite different league altogether.

Calum Beeson of the Camborne School of Mines (CSM) – a geologist by profession – had spent the previous couple of years working with the Caradon Hill Area Heritage Project (CHAHP), based around the village of Minnions on Bodmin Moor. The aim of that investigation had been to interpret the archaeology of the area from various social and physical perspectives. Consequently, he has come to know the south east of the Moor in considerable detail.

A man with an open mind, a multi-disciplinary approach and a relaxed, yet professional, presentational style would always be welcome in our midst – but little did we know just how welcome he would become. When the CHAHP funding ran out, Calum moved on to CSM, where he is now a senior technician and trainer – and, much to our benefit, has become the effective curator of the CSM’s internationally recognised collection of mineral samples, together with various associated accoutrements.

Whilst searching through the (almost literal) gold mine of archived pieces for other purposes, he came across a seemingly unremarkable box of items packed away years ago – and probably all-but forgotten.   Like catching a twinkle in the lode, he knew instantly that there would be a few of his former associates ‘up the line’ who might just be interested in its contents.

Billed as a ‘surprise’ talk – and even I didn’t know what was about to come – the surprises started to emerge. First out, a couple of bits of dingy stick, with a copper clip, which turned out to be whalebone dowsing rods – too fragile to use now, but once used by real prospectors, and probably dating from the 1920s or 1930s.

From the reaction of the assembled multitude, we could have spent the rest of the day just talking about this fascinating find, but lo – next out was a portfolio of information about the finds of a practical mineral dowser, with an accompanying letter from the practitioner, describing the nature of his work. Calum had made images of some of the diagrams he had found in this cache – one showing how to dowse for mineral lodes, using a variation of the Bishop’s Rule that water diviners would employ in their craft. This stuff is clearly priceless in dowsing terms, and people were evidently appreciative of just being able to see it.

But it just kept on coming. Next, a beautifully-made dowsing ‘cone’ (think large hardwood conical pendulum), with carefully drilled slots in the top for witness samples. There was a description of how to use the equipment, including how to analyse (by dowsing) the elements included in compound samples and alloys.

By now the audience was almost whooping with delight, but there was more. A final precious artefact to emerge from Calum’s Aladdin’s plastic box of surprises was described as a Dowsometer. This is a technically-crafted wooden divining tool, for which there are no instructions – and even Calum wasn’t too sure how it operated. It appeared to be a device that allowed a swinging cone to indicate the constituents of a sample against a now-lost piece of interpretative marked paper.

These items are clearly of national dowsing significance and, thankfully, Calum has the insight to appreciate the value of what he was showing to us.   What was intended to be a five-minute comfort break, tuned into more like half an hour of animated discussion and careful examination of the CSM materials.

In a sense, this was just the warm-up act for the real presentation about the geological input to the life and times of the megaliths at the Hurlers. With those attending well primed for the unexpected, Calum eventually managed to get back into presentational mode – only to produce other virtual rabbits from a very different hat.

Combining his geological knowledge with that of his archaeological colleagues, he displayed a diagram of the underlying rock strata of the Hurlers complex of modest megaliths. Understandably, most of the sub-strata is granite, but with adjacent intrusions of slate. At the abutment of the two are known geological faults. Nothing unusual there – but an overlay of the archaeology of both the Hurlers Stone Circles and the cairns at nearby Stowe’s Pound, showed that the megalithic features align very accurately and inexplicably with the edges of the faults.

Given that (as far as we can tell) Bronze Age man had no subterranean map of the area, and that there would be no way of physically finding out what lay beneath their homeland – even if there had been any reason to seek to find out – the juxtaposition of the man-made surface features and the underlying natural strata is quite remarkable. Presumably, the only way people three millennia ago could have acquired such knowledge, and then have felt it to be of such importance that they spent considerable effort constructing sizeable and complex ‘markers’ or ‘tools’, would have been by sensing it – aka dowsing, in all but name.

The fact that Calum isn’t actually a dowser himself, and was merely relaying this ‘surprising’ information, drawn from meticulous practical on-site research to others who he felt might be interested, gives even greater credibility to this conclusion.

Calum and his colleagues have also used cutting-edge and non-invasive analytical techniques to determine the types of granite used in the three remaining partial circles at the Hurlers. Their findings unequivocally show that the material used in each of the circles was drawn from a different source (albeit all quite local to Minnions). This indicates that the complex was erected in stages – probably by different groups and over an extended period. This further implies that the Hurlers complex evolved over time, and could have been used by different people for different purposes (as at Stonehenge and elsewhere).

The emerging scientific methods employed by CSM also allow him to differentiate those stones that are part of the deliberately erected array, from natural rocks scattered around the same area. This is hugely significant, as the shrinkage of the peaty soil has led to the re-emergence of natural rocks into a land surface of ‘ritual’ features constructed by humans.

Interestingly, the ‘Calendar Stone’, sited off centre in the middle circle, which appears to allow that part of the site to be used for astronomical recording and prediction, can now be shown to come from another source entirely – and was presumably selected specifically for that function. So many new pieces of the jigsaw, so many new questions, so many new dowsing directions.

Calum has recently acquired additional funding (both from a wide range of local sources and also, substantially, from the National Lottery Heritage Fund) to excavate and investigate a potential fourth circle, just to the north of the known three.

Perhaps for just about the first time, this unforgiving part of the moor was warm and sunny, and we even appreciated the gentle breeze. Another quite unexpected, and almost surreal, surprise!

Many thanks to Calum Beeson for travelling up from Falmouth (the CSM is now integral to the University of Cornwall, at Penryn – and ultimately part of Exeter University) and for making this a day of super surprises. I am sure he will be back with us in due course – and I was all for signing him up straight away!   Maybe when his fourth circle research has been concluded and considered (work starts on September 13th, 2016, and visitors are welcome), we can have another discussion about the implications of his work.

More importantly for the dowsing community generally, as a result of this talk he will probably become a much sought after speaker for other local and BSD national groups.

Many thanks, as ever, to everyone who helped to put on this event – and, of course, to all those of you who attended it.