If the earth was flat, you could almost see Brittany from our house on the edge of Dartmoor. It’s closer to us than most of Britain, and we love it to bits.

On the occasion of our Ruby Wedding, my wife Ros suggested that we take ourselves off to celebrate quietly – somewhere safe and simple, somewhere that we had always felt comfortable. There was only one choice – and it’s a wonderful place to go dowsing.

As a precursor to this jolly jaunt, I had recently attended a talk given by Steve Dawson to the EEG, on the subject of Hartman and Curry (H & C) lines. To be honest, even though I have been dowsing earth energies for a couple of decades, the H & C lines had never really grabbed my attention – maybe it hadn’t been my time to work with them. Steve’s talk was clear, straightforward and persuasive, so I resolved that the next time I was out doing something else, I’d give the H & C lines some proper attention.

In case you have never heard of these currents before, in a nutshell, the Hartman lines run true north to true south, true east to true west, a few metres apart, all over the world. The Curry equivalents run diagonally across them – NW to SE and NE to SW. Some dowsers don’t find them at all, but most can – and I feel it all depends what you are looking for.

Steve’s assertion that all pre-reformation churches (and Pyramids) are ‘designed’ to incorporate H & C lines into their architecture seemed a bit bold to me.   So, where better to start the cross-examination than on the French equivalent of St Michael’s Mount – Mont St Michel, just off the coast of Normandy. It was a busy summer Saturday, and the travelling throngs were talking in tongues (being tourists, like us). Having climbed the many steps to reach the still fully operational chapel of this astonishing multi-layered construction, and finding a quieter spot, I duly got out the rods to ask for the nearest H or C line.

To my considerable surprise, I found myself pointing straight at a nearby pillar. As I moved around the huge chapel, and around the rabbit warren of associated rooms, every time I asked the same question, the result was much the same – I was looking straight at a supporting pillar or a pillared corner. Even going down to the crypt, where the columns looked to be just a jumble of massive stanchions, located wherever the solid rock was best suited to take the enormous weight of the colossal edifice above them – they were on H and/or C lines, again and again – not ‘quite close under the circumstances’, but spot on, dead centre. This clearly needed a bit more thought. 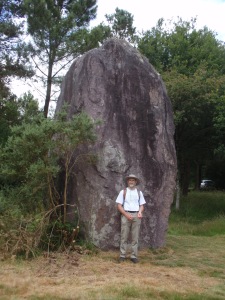 A few days later, we found ourselves amongst the monoliths of Monteneuf. If you have never heard of them, it’s not surprising. When I visited this huge cache of standing stones in 2007, on tour with the EEG, they had only recently been rediscovered in dense woodland. There was a lot of archaeological activity, a new information centre, loads of visitors and it looked as if it would rapidly become the new French Avebury. Eight years on, and quite inexplicably, it was unusually quiet. OK, it was raining, but the visitor centre had been relocated deep into the forest and the signage to get to it was minimal. Plans to re-erect another 400 stones, still lying prone amongst the trees, had been shelved, and the scrub was starting to reclaim parts of the site. If I hadn’t been there before, I would never have found it – and it took quite an effort, including asking some rather indifferent locals, to get there at all. How odd.

However, the massive menhirs that have been re-erected are a magnificent sight, and it’s an earth energy dowser’s Aladdin’s Cave.

In 2007, it seemed just a mess of energies, and the visit was a short one, so we could do little more than admire it. In 2015, we almost had the place to ourselves, and several years more dowsing experience under our belts.

I thought I’d start by testing out these unexpectedly interesting H & C lines. So, I stood vaguely in the middle of the complex (and there are dozens of massive menhirs, spread over a wide area) and asked for the nearest line. I found myself pointing straight at the pointed edge of a truly massive specimen very close to where I was standing. Dropping the rods, and asking again, I came up with the middle of the face of another monolith – and so this went on, with both Hartman and Curry, until I could hang on to my scepticism no longer. These behemoths were all on H & C lines and, even after the passage of 7,000 years or so, still very precisely placed indeed.

However, there are also a considerable number of smaller stones on the site – still big by UK standards, but less massive than the ones I had picked up so far. I examined some of them directly for H & C lines and found a correspondence that was little more than random, especially given that the whole place is littered with very large objects.

By dowsing, these dated to having been erected around 4,000 -5,000 years ago – and some of them had even been fashioned out of the remnants of much larger pillars, which had been toppled. The blurb in the information sheet indicated that there seemed to be a couple of distinct phases in the construction of Monteneuf which, if we think about Stonehenge and the like, is not all that surprising.

What was a surprise, was that although these more modestly sized rocks had little H & C relevance, they did line up pretty well with energy leys, ‘draggon’ lines and other earth energy features. It was as if the template for erecting the stones had changed over time.

No wonder we’d had such a problem on the previous occasion. It was like walking through two buildings nested inside one another – and wondering why the walls, the windows and the doorways didn’t line up.

Clearly this doesn’t explain how or why H & C lines came back into fashion by the early Christian period – although one could argue that the architecture of that belief system was rooted in another culture entirely.

For me, Hartman and Curry lines have something to do with the size, shape and the spin of the earth. They are planetary grids. I don’t find them to be electromagnetic, nor are they located in the psychic or spiritual realms. They appear to be (as Billy Gawn would say) akin to gravitational lines of force. They are therefore part of the natural environment and of the information background – to be discovered, rediscovered and used as appropriate, for the epoch you happen to be living in.

A bit later on our holiday, we had a saunter around the now fenced-off stone rows at the even more extensive sites around Carnac. H & C? – well, not really. The stone rows there are long and numerous, but they’re not dead straight; they gradually meander. However, like a joker in the pack, one particularly big stone, standing head and shoulders above the legions of others, did dowse positively for both Hartmann and Curry – even though it was also part of a continuous alignment of other smaller stones. Maybe, this was an echo of the situation at Montneuf. Leys and ‘draggons’? Present to some extent, but more as a result of the stones being erected than defining their original socket locations. Another type of Earth Energy Grid line entirely? – Yes!

There is so much more to discover in the wonderful world of earth energy dowsing.