The Search for Tywardreath Priory (2)

Tywardreath is a small town (pop. 5,000) on the south coast of Cornwall, UK, situated between Par and Fowey.   Now a quiet settlement, it was formerly a bustling port (long since silted up) dominated by a wealthy and powerful Benedictine Priory. Despite the scale and influence of the monastic organisation, the religious buildings have completely disappeared during the intervening centuries. Only fragments of masonry remain, embedded into various, still extant, structures around the area.

On Sunday 24th September, Nigel and Ros Twinn, representing the Tamar Dowsers, attended an event in the In Search of Tywardreath series.

Our first line of approach was to seek to examine map dowsing previously carried out by Alan Neal, the most experienced member of the Tamar dowsing group. Alan had identified a potential rectangular target, a little south of the current mainline railway track, using Google Maps (see image below).

The site adjoins an ancient footpath, shown by dots on the image (and now part of the Saints’ Way, a recreational long-distance hiking trail). Although we were unable to gain direct access to the field in question, dowsing from both the south and the east (in the Saints’ Way) confirmed that this building was associated with the former priory. However, our dowsing indicated that, although the former structure was both contemporary with the Priory during its most prosperous period, and had a considerable footprint similar to that indicated, it was probably a farmstead and/or accommodation complex belonging to the monks, rather than ‘The Priory’ itself. Walking back down Wood Lane towards the present parish church, my dowsing indicated that there were many other buildings and plots associated with, and probably formerly owned by the Priory, mostly now lost under subsequent phases of the spread of the urban area.

Having obtained permission to dowse within the churchyard, and with all due respect to those interred there, many of whom doubtless still have family members living in the vicinity, we sought to identify the outline of the former main building.   By dowsing, I obtained a high-level estimate that around 35% of the former main site had been built in and under the current churchyard, including the church itself, with a similar amount under and beyond the road to the north of it (now called North Street).

The west wall was flagged up (in white in the images below) running close to the modern war memorial, built in the form of a Celtic Cross. This western edge is on a different alignment to the west wall of the current church.

Similarly, the former east wall was flagged (again in white in the images below) to indicate the extent of the buildings. Although mainly working from the path to minimise intrusion onto the graveyard itself, the alignment can clearly be seen. This elevation appears to be much closer to the angle of the current church.

The outer width of the wall (about a metre) is indicated by the two rows of flags.

Although difficult to work in the verdant wildlife section to the south of the tarmac path, I ventured far enough to determine the southern end of this wall, which turns westwards and close to a right angle just behind and below the tombstone of Mary Jane, wife of Joseph Rosevear, about 30 of my smallish paces south of the path.

The first tentative conclusion of this initial dowsing is that either the Priory complex was vast, or that I have dowsed an agglomeration of buildings, possibly relating to several phases of occupation. As with all dowsing, you only get the answers to the specific questions you ask – and I was merely asking for the foundations of the main Priory Building.   However, given that I was working as discreetly as I could in a consecrated location, and not in open countryside, I am comfortable that what we have here is the outer edge of the heart of the Priory, perhaps including cloisters and internal courtyards. Subsequent dowsing (and/or a full geophysical survey) could hone it down somewhat more usefully, although direct archaeological excavation would seem unlikely to be permitted.

To take an alternative dowsing approach, all ancient sacred sites are known to have a fairly common, and easily sensed, energetic footprint. All churches, including the existing one in Tywardreath (dowsed briefly from outside), have certain alignments of earth energy lines (probably geological in origin), underground water and at least one enigmatic ley. The ley associated with the original Priory (which is huge – at least six metres across – see image below and flagged in orange) runs from close to the modern eastern entrance to the churchyard, through the modern sexton’s ‘shed’ and south west across the churchyard. This would indicate that at least some of the main elements of the Priory were situated in this southern sector. Below that, the ground now slopes steeply into the valley and the formerly flooded area – and it is difficult to imagine that any significant stone-built structure could have been constructed much further down the gradient during the period in question. 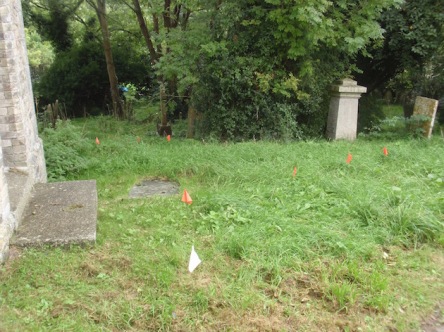 I also dowsed an internal wall of the former Priory from the footpath (but failed to take a photo of it!), a little to the east end of the current nave, which was on the same alignment as preliminary dowsing undertaken (in the rain!) from the northern footpath in North Street. This was helpful corroboratory evidence for the extent of the Priory buildings, especially as the internal wall was also later found independently, by a dowser under tuition, from the footpath in the churchyard.

One other piece of information gleaned was that the location of the high altar of at least one phase of the Priory was located hard up against the potential eastern wall that I had dowsed. This was found by both Ros from the TDs and Helen of ISOTP, and it could indicate that the ‘east wall’ I had pinpointed may have been an important feature. The rear of the high altar is flagged in orange in the image below, with a couple of my east end wall white flags visible –to the right.

These initial findings are tantalising, but must be considered to be only indicative at this stage. Further work, with greater access both to the churchyard – and particularly to the potentially informative southern sector – as well as inside the current church itself, would need to be undertaken to identify specific information relating to the phases of development, and the subsequent demolition of the buildings across the site.

The fascinating maps and diagrams, provided by the Cornwall Records Office, indicated a wealth of interesting features – some indicative, others apparently definitive – worthy of such investigation.