Over the Sea to Ì

The EEG on Tour in Western Scotland

No one expects the unexpected!  The Road to the Isles turned out not to be the rural idyll of folksong fame, but a classic modern highway with madcap driving, and hoards of hairy bikers roaring around Loch Lomond, making a sunny Bank Holiday Sunday in the Cotswolds seem almost mundane. However, it was framed by such stunning, sequentially-layered, Scottish scenery, that it set the whole escapade off on very much the right footing.

In a similar vein, the red road across Mull wasn’t the reliably dull inter-urban route typical of the OS map – but 40 stop-go miles of single track local road with passing places.  But nothing prepares the novice to the Western Isles for the sheer multicoloured magnificence of the bens and lochs, glens and crags.  Where siskins outnumbered sparrows by thirty to one; where oystercatchers were as common as gulls – and the greatest threat to the local wildlife came from within – hen harriers, merlins, eagles and ospreys – this was the EEG almost on another planet, albeit briefly – and getting a glorious glimpse of a parallel paradise.

The dowsing was pretty exceptional too.  Before the plot was hatched, few of us really had much idea about what to expect in Kilmartin Glen.  Our precursors had spoken of it in glowing terms, but a glen is just a valley with a little stream – isn’t it?  Between high ground clothed in purple, yellow and olive green runs a wide post-glacial channel strewn with the remnants and remenances of sensational archaeology.  At least seven barrows in a linear alignment, some with internal chambers of widely disparate ambience; enigmatic stone circles, carpeted with rock fragments and shrouded in ancient woodland; enigmatic standing stones, some solitary, other in curious clusters – and, most enigmatic of all, some of the largest and most fascinating examples of rock art of its genre in Europe.  Additionally, we had a church with three ancient stone crosses ‘salvaged for their own protection’, yet almost devoid of the usual earth energy features, places where compasses (let alone mobile phones!) failed to work, the hillock of Dunadd, on the valley floor where Pictish kings had been initiated, providing their footprints matched the rock-cut platens – and on it went.  Not a bad start.

While the weather cut between persistent drizzle and brilliant sunshine, the persistent dowsers and the brilliant dowsing carried on regardless.  As none of us had really ever been to these parts in recent times and, in the absence of a formal guide, we took to following ideas and routes provided for us by Grahame Gardner and Gary Biltcliffe.  So, driving and voyaging from mainland Argyll to the (unexpectedly large) Isle of Mull, our first port of call was the only circle on the island, at Lochbuie.  Given the obscure location, inclement weather and sodden terrain, this was something of a safari in itself.  But the stones themselves had a uniquely ageless quality, in an environment that had probably changed little since their erection at this exquisitely portentous place.

Another of Gary’s pointers took us to the equally remote, yet also locationally outstanding, little ruined church at Scoor.  Remaindered in the vast open landscape, and looking down towards the distant loch below, if felt almost like a film set – but of course the real scenario was quite the reverse.

Fionnphort (pronounced Finfor) on the south western tip of Mull is the jumping off point for our headline destination – Iona.  The landing place of St Columba, and of his mission to Christianise the Scots, Picts and eventually the Brits, has a feel all of its own.  Like Lindisfarne or Lundy, I think you really have to stay there for quite a while, and when the day-trippers have returned to their own version of civilisation in the evening, to get the full benefit. In the end, we only had one dowsing-packed day, with the intended second day curtailed by high winds, which disrupt the ferries from time to time.

However, I can report that just being on Iona is quite an experience.   The abbey itself is an impressive dowsing location, and a historical and cultural destination of huge significance.  However, other structures on the island, such as the ruined nunnery and the many wayside crosses are arguably just as significant for the earth energy dowser.  An unmarked site, looking at a distance like a disused barn, and unapproachable beyond the extensive archaeological excavations, seemed to be the gathering point for several energy and grid lines – and worthy of a site visit in itself, one day.  St Columba’s writing room, the attached and outlying little chapels, each with their own energetic nuances, the museum and the relics and artefacts of those early monks all made up a sensationally compact day of divining.

We even managed to work in a brief trek to the high point of the Island, Dun Ì.  From there the panorama took in Tiree and Colonsay on the western horizon, Staffa (of Fingal’s cave fame) and a great swathe of the western coast of the mainland.  This apex was resplendent with leys and lines of consciousness, fanning out across the beautiful blue waters in all directions.  It also hosts the Spring of Eternal Youth – in fact, a pristine pool, which never runs dry due to it being fed from a source of very pure water under natural pressure from hundreds of feet below.  A high point of the day, in more ways than one.

Clouds and silver linings being what they are, we spent our last day not back on Iona, but scouring the back roads and less well-trodden sites of Mull, aided by Gary’s increasingly crumpled page of directions.

The unusual church of Devraig, situated on a promontory, with its round tower so reminiscent of the similar, and much older, structures in Ireland, and the quite unexpected standing stones at Kilmore on the hillside above it, proved to be very worthwhile visits in their own right.  Devraig has a unique, if modern, stained glass window depicting a ‘pregnant Mary Magdalene’ with Jesus.  Decoding the artwork, shows the male figure with the halo of the holy (so it isn’t meant to be Joseph) and the blue-clad female figure with no halo (so it isn’t a representation of the Virgin Mary).   The church stands on a site sacred to local inhabitants for millennia, and contemporary with the standing stones to the east.

The latter have only recently re-emerged from post war pine plantations and are now dowsable in full view for the first time in living memory.  Our dowsing indicated that there were never more than the five substantial remaining megaliths, of which three are still standing.  Bill found that they were originally set in a crescent, rather than a row – a remarkable discovery, which throws new and more nuanced light on the meandering lines of stones at Brittany and on Dartmoor.  It’s all too easy to assume that they have moved with the land over time, or maybe have been re-erected in the wrong place.  Hmm.

The week was one full of surprises that left us with numerous new avenues to explore. The dowsing was crisp and clean, even in the rain – and somehow quite different to other Celtic domains.

There were locations, particularly at Kilmartin church, in some of the chambered tombs and especially at Scoor, where our non-physical presence, as outsiders, was not entirely welcome, and we had to be actively aware.  However, once the local guardians came to appreciate that we were friendly and kindly foreigners, the guards were lowered, at least enough to let the proceedings continue.

At other sites, the sense of wellbeing was almost tangible.   In some of the cairns, at various places on Iona and, in a different way at the Kilmore stones, there was a particularly warm welcome and an engaging interaction.

My most resonant cameo of the week was the astonishing rock art at Achnabrek near Kilmartin. Not only was it huge, and genuinely mysterious, but its juxtaposition with energy currents, and with planetary and earth energy grids left me wondering where to start – and it made me think afresh about some of the sites I thought I already knew inside out closer to home.  This kind of dowsing shows that reality is soooo much more complex than our everyday senses can process in real time – and maybe more than we can even imagine. 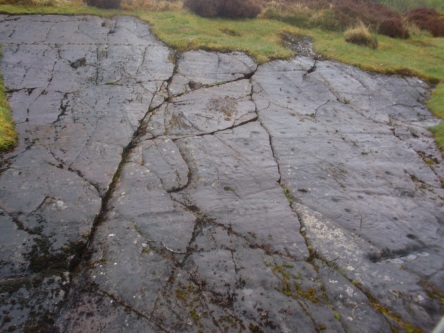 The ongoing exchange of ideas between dowsers from different parts of the country, and not forgetting the significant French input, enabled us all to get far more out of this visit than we would ever have done as individuals.  However, such a Cook’s Tour (or should that be Holding’s Tour) of an expedition can only ever act as a taster for such a rich and diverse dowsing panoply.

If you are ever passing that way, or indeed, if you ever have a few days to spare and don’t mind treating the journey as part of the expedition, the Western Isles are hard to surpass, both in dowsing and spiritual terms, and in sensory and landscape ambience.

Our very last site was a well-deserved, and very welcome, visit to the whisky distillery in Tobermory – but we only went there to get some presents to bring home, you understand.

Many thanks indeed to all those attending, and especially to Bill Holding for instigating the adventure and – both metaphorically and literally – holding the whole matrix of people, logistics and experiences together.